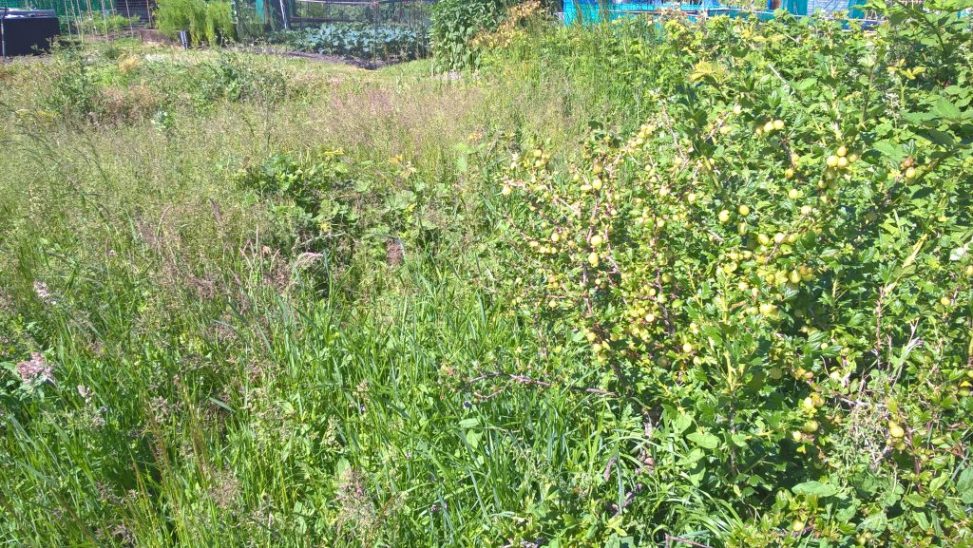 At last I have my own allotment, plot no.42, and a fine little plot it is too – tucked in between plots on all sides so I should get plenty of shelter and some structures around to slow the wind.  Being in the middle is great for shelter but a bit of a pain for access but in my case I had inherited some lovely fruit bushes so no complaints!

You often find that the previous holder has moved on to another plot (often with a better aspect) so they may still be around or one of the neighbours can tell you a bit of history and this is always useful.  In this case the previous owner who only had it for a year, had, according to the neighbour, just used it for potatoes.

In fact as I wandered around it looked a lot worse than it actually is – a bit overgrown and I can see there is a lot of horsetail in there. The previous potato growing (and associate digging) may well explain the fair amount of horsetail which was poking up in various places.

I am not really planning to do too much to it this season as I really want to just get it cleared and tidy but we may well get a few bits and bobs in as the season goes on.

Now there is no shortage of advice on how to get started with a plot but my general approach is to walk over every bit of it just having a look and making a note of any thing interesting.

I can see I have inherited a couple of mature redcurrant bushes, a couple of gooseberry bushes, some raspberries (not sure whether they are summer or autumn fruiting yet) and a lots and lots of weeds. The bushes I can see desperately need a good prune but that I will have leave that until to the end of the season.

Fortunately there isn’t too much actual rubbish to clear away, just the usual bits of plastic and rubble.  When we cleared MrsB’s plot there were beer cans, old forks, spades, random bits of plastic edging and odd shaped metal, spent firework rockets and big pile of soil (and assorted vegetation) so in that regard I have got off lightly!

Back to the horsetail as this does have an impact on what I can do with the plot.  It is mainly concentrated in one half of the plot which is better but horsetail (once you start to read about it) is a challenge to get rid of as its rhizomes run deep (see picture) and if you try to dig it it out the stuff can rapidly spread from any small bits left behind.

I debated on various ways to deal with the horsetail and in the end decided I am going to spray tree and stump killer over the plot to get it properly cleared and that would knock back the horsetail.  When I say knock back that is all it will do, I am expecting next year it will be back but should be substantially reduced and that I will deal with by hand.

What this does mean however is that I won’t be able to rotavate the plot for a couple of years which is a pity as it desperately needs it.  Even digging over is probably best avoided but I don’t mind.  However the other half is reasonably clear so I can do some light digging on that side and have some root crops and I will just put shallow rooting crops in the most affected half.

As an aside, I saw what happened when someone kindly rotavated for a newcomer a plot that had a just a bit of horsetail in it – within a relatively short space of time almost all of that lovely bare plot was a small field of horsetail.

This brings us back to where we started, when you take on a new plot if there is one piece of advice I have read and and can wholeheartedly confirm it is don’t rotivate it until you have the weeds under control.  Ignore this and you may well end up with a field of weeds (having paid someone who should have known better to rotivate it for you) which will be disheartening as somewhere within it are all those things you eagerly started growing.