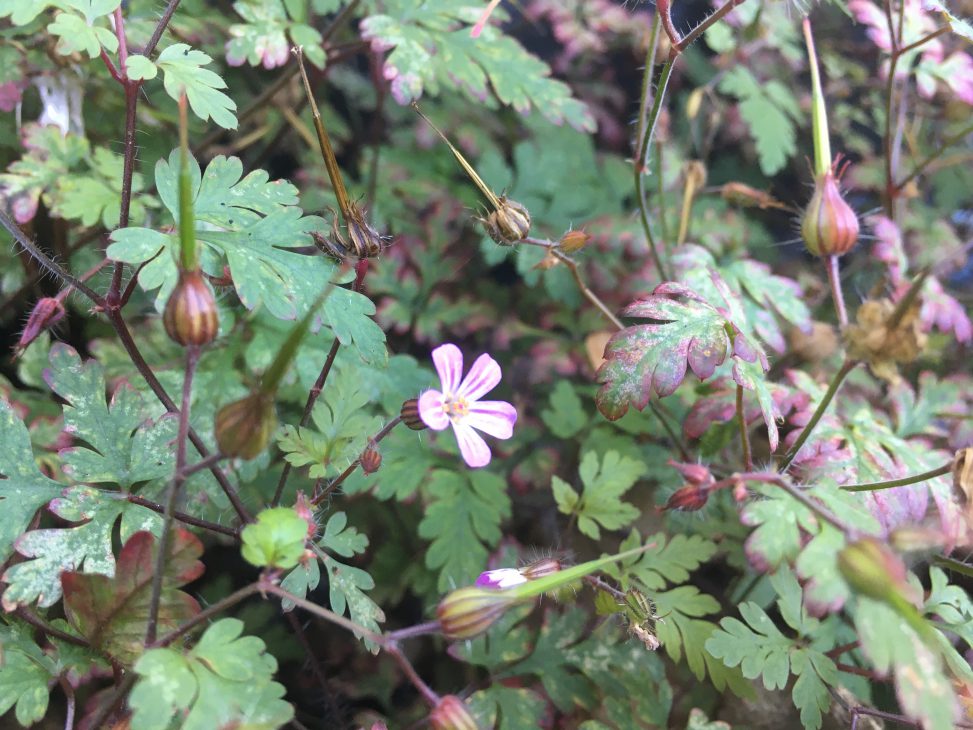 Weed of the Month – Herb robert

There are some weeds I come across and I cannot for the life of me pin down what they actually are. However there was an “Ah ha” moment a few weeks ago for a low growing geranium form of plant with red stems and pretty pink flowers which I often find in gravelled areas or tucked in a shady spots.

The plant, often deemed to be a weed, is actually Geranium robertianum or more commonly Herb robert. I knew that this must be a type of geranium because of the (metallic to me) smell of the foliage as it is being removed from beds and gravelled areas but it did take a while to pin down what it actually was and it is an interesting plant.

Herb robert is considered to be lucky(?) if carried about but it is also known by quite a few other names including: Bloodwort, Red robin, Stinking Bob and the fabulous ‘Death come quickly’. The latter name arrived at for those who kept it in the house thus finding themselves on the wrong end of a curse (see the Trailkeepers of Oregan link at the end of the post).

Apparently the leaves are edible and you can make tea from them however you won’t find me anywhere near such a concoction.

It was (is?) also used to treat a variety of ailments such including toothache, headaches, skin eruptions and as an antiseptic but again the prospect of that smell I think would be enough to restore anyone to full health quickly.

Herb robert is an easy weed to deal with by hand. There is a thin slender root running down from the crown which sits on top of the soil so the plant can easily be removed just by pulling the crown.

Explosive seed pods so it will spread out over a wide area quickly.

Depending on the variety this is either an annual or a bienniel so provided you remove it before it has a chance to set seed it shouldn’t return.