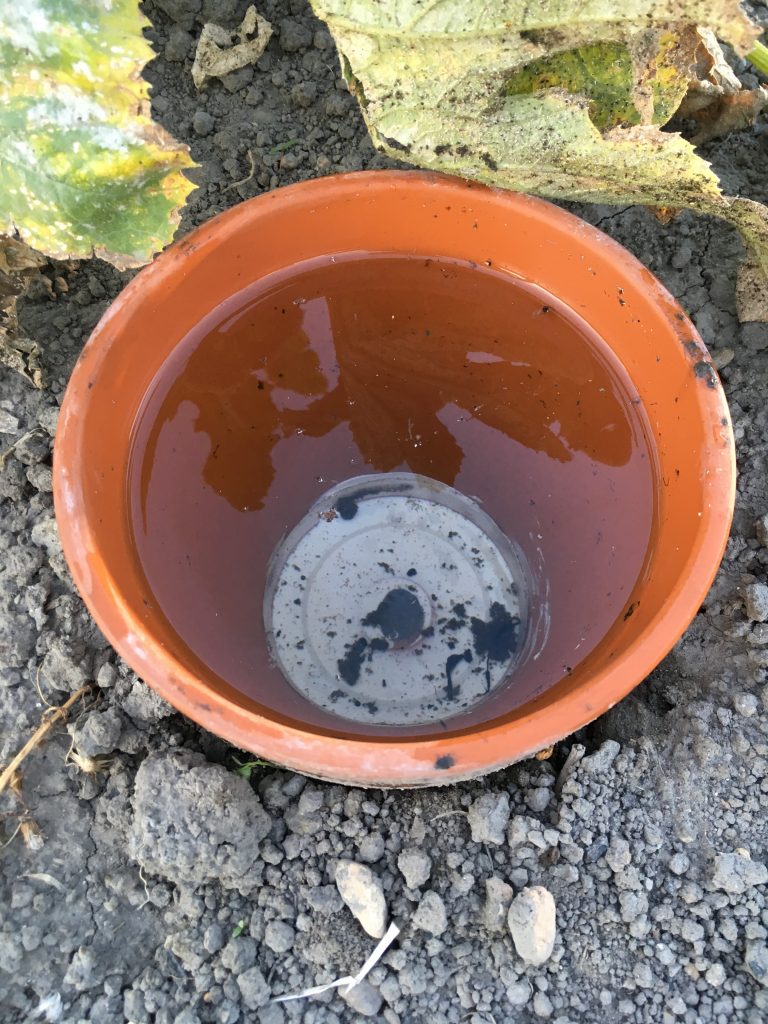 Results of the Olla experiment

Earlier in the season I came across the lazy-persons way of watering – Ollas – terracotta pots sunk into the ground next to your plants which reduce the need to water.  Really, honestly(ish), I was more interested in this as a means to save water and it had the added bonus of not watering weeds. So I set up a simple experiment with two marrow plants, one without an olla (aka Bill) and one with (aka Harry) and here are the results!

Before we get to those eagerly awaited results I pulled out the olla pot and as you can see from the photo below the roots of the marrow have grown around the olla.  Most are around the middle of the olla and very few toward the bottom (remember the bottom of the pot is sealed so there wouldn’t be much water there).  Anyway, very interesting and something I want to come back to.

OK, the results and they do make for interesting reading.  Both plants had one fully formed marrow but they were definitely different in sizes.

First we have the marrow (aka Bill) grown with regular watering (picture below).

Then we have the marrow (aka Harry) that was only watered through the Olla (picture below).

This is not a rigorous experiment by any stretch of the imagination but the results are interesting and useful.  So what have we learned about watering using an olla rather than regular surface watering?

Seems like a bit of a no-brainer really – regular watering wins hands-down if you want bigger marrows but did we really expect anything different?  Let’s take a look at the other side of things.

I would estimate I was putting about a pint of water on the watered marrow each day and this was over a period of about 7 weeks – so 49 days. I probably missed a few  days so let’s go with 40 days.  This means I put around 20.0L of water on the watered marrow.  For the olla I was filling that once a week so 7 times and probably using 1.0L of each on each filling giving 7.0L in total.  In other words I was using 65% less water.

So 65% less water gets us a marrow that is about 57% less in weight – conveniently similar but really not a huge surprise.  Bear in mind this isn’t a rigorous experiment but the results are really interesting.

Ollas have been used for hundreds if not thousands of years but I haven’t come across any scientific study of how effective they are – hence my little experiment. I am going to keep experimenting with ollas and next time I am going to make few changes including:

I also want to look at how I can get a better idea of how the moisture is around the plants and perhaps determine whether taller (and so deeper) or differently shaped ollas have significant effect.  There is also the aspect of which ollas are better suited to which crops – crops with larger root systems will fare better of course but it is still useful to know which will benefit and which won’t.

On a balance I think ollas combined with a bit of surface watering will be the best way to go.  It will reduce water consumption and effort considerably without necessarily reducing yield – now I need to prove it of course!