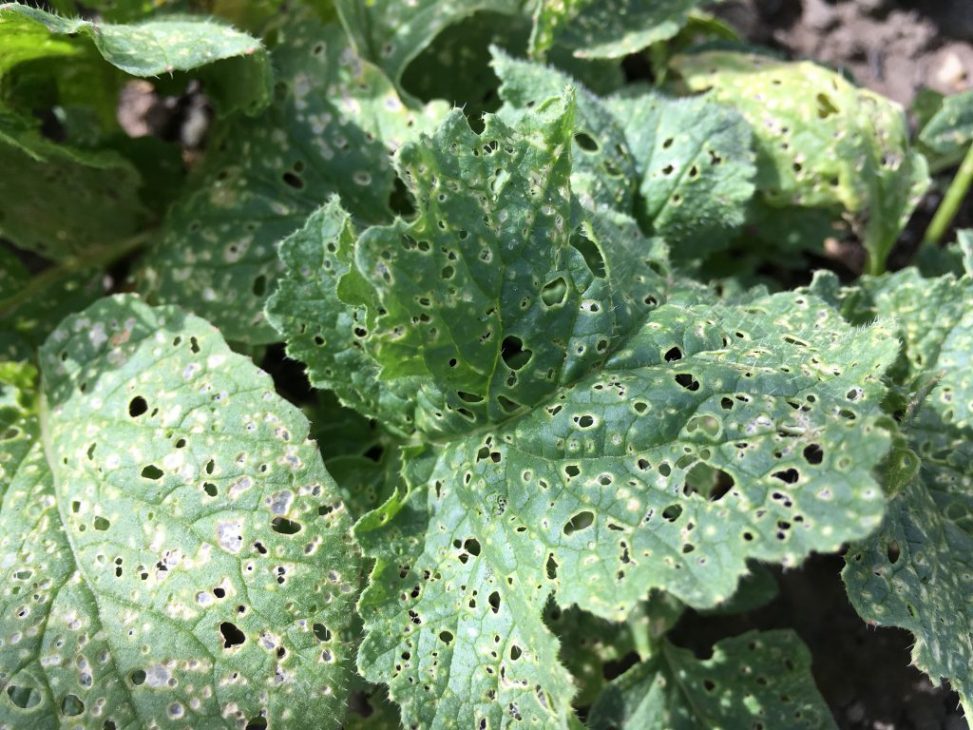 Radishes and me don’t agree

I am really not having a great deal of luck with my radishes.  In theory radishes are, after cress and strawberries, easy peasy to grow – unless you are me of course.

Problem 1 – Holes in the radish leaves

We had a few radishes earlier on in the summer but the “crop” wasn’t great (we will come back to that in a moment) and so I have decided to plant another row.  All was looking good for a couple of weeks, the seed leaves appeared and we were back in business but within a couple more weeks the leaves looked like, well see for yourself – full of holes by some mystery chompers that had decided to take up residence.

This is becoming a regular cycle and one I need to break because I love radishes and all this damage won’t be doing them (or me) any good.  So we need to find out what is going on and according to the Internet the most likely culprit is going to be flea beetles (also a big fan of swedes – which makes sense as I had some swede seedlings in a small trough not far away and looking just as decimated).

As an aside, one of the odd things about the allotments (or not when you think about it) is that the allotments are a micro-climate all of their own and each plot and then each corner is in itself a micro-climate.  In other words, someone just across the way will produce a line of lovely well rounded, clean, tidy radishes without lifting a finger but for you it is going to be a tale of woe time after time- even though you are only a few allotments way.  It needn’t be that way, we just need to learn and adapt.

So… how to deal with our, sorry my, problem – stopping this happening.  To the Internet we go and options vary but I would, as would we all, like to avoid using chemicals, so I am going to dig the plants out radishes or not and we will start again with some Enviromesh over them from the beginning.  There is plenty of time left in the season to see how we go.

Problem 2 – Holes in the radishes

We did have a handful of radishes earlier on in the summer – but only after chopping out bits that had a variety of holes running through them (see below).

This was a bit frustrating, the flea beetle all over the radish leaves we can just about cope with but whatever was going on in the radish itself was ruining things big time.

And so back to the Internet we go and the culprit (according to the folk over at Harvest to Table) is a root maggot – with adults that look look like a housefly – this is interesting as we seem to have a lot of those around at them moment.

According to Harvest to Table, the way to deal with this is some wood ash around the roots (or lime) or avoid the insect life-cycle.

The last part is something that strikes a chord – I am keen to get some radishes but if I really want to have good radishes I need to be taking insect life-cycles much more into account.   Not only do I need to be more attuned to what is going on in the local environment (aka micro-climate) and more aware of what the insects are doing but also know where they are in their life-cycles and plan accordingly.

I will dig out the duff radishes this week, move to another unused patch, sow some more, put some Enviromesh over and see how I get on this time.

Radishes are simple and hard

In theory radishes are one of the easiest things to grow but in my experience of life, things that are (or seem) the simplest are often the most difficult. If I can get my radish crops sorted then I think I will learn a lot from that and be far better prepared for whatever rocks up next.

If you have got problems with  your radishes, then this is well worth a read and if I find any more useful resources I will add them here: