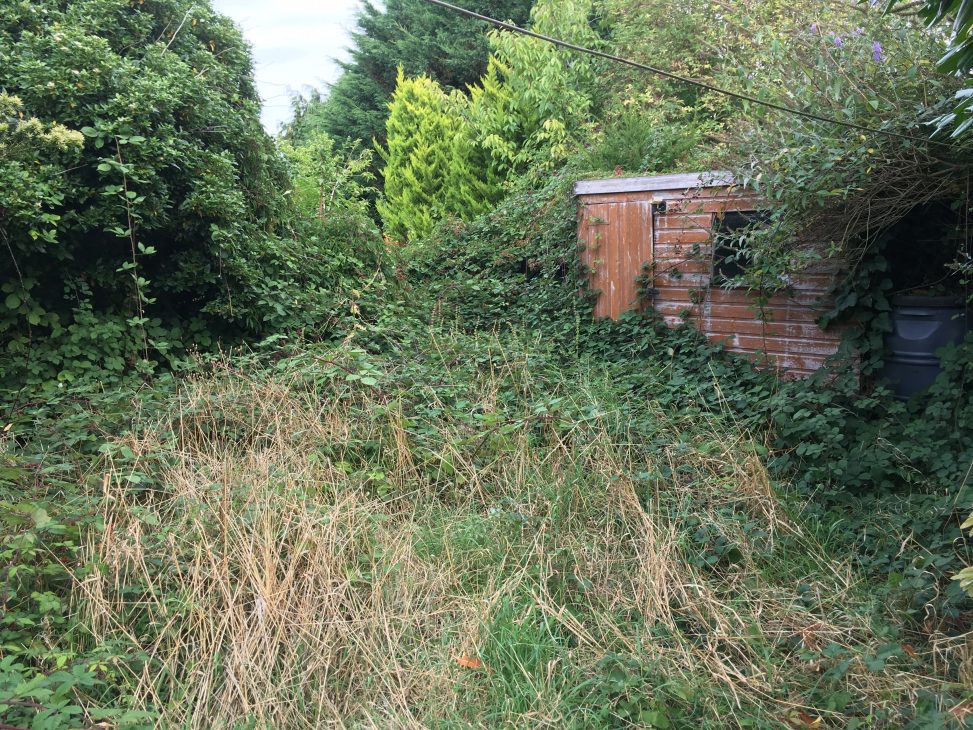 The brief was “it is full of brambles” and they were not kidding. As part of my Didcot Good Neighbour Scheme work, one of the first gardens I visited was for a then recently referred client. I hadn’t visited the garden beforehand so wasn’t sure what exactly to expect or exactly how it was going to be tackled but that is all part of the challenge.

So first things, first – the front garden which you can see below.

This actually wasn’t looking too bad and because the client wasn’t in on that day (so we could look over the back) the first session was spent just tidying up the front garden and after a couple of hours work we had it looking a lot tidier.

When you first come to a garden like this you can see instantly what it was once like and by focusing on the front garden first we can give the client a garden back they can no longer feel ashamed of.

With the front garden now starting to look better we could turn out attention to the back garden which we did on the next visit.

So here is what the back garden was looking like at the start of September 2018:

Now the temptation is to just dive straight in and start hacking things back and that would be a mistake. There are a few things to bear in mind before we start on a job like this:

So in this case there is a patio next to the house and this was the first bit that was cleared as we could then use that as an area to hold the waste. It also means the client can see some real progress and start to feel the garden is starting to return to their control again rather than the other way around.

We then worked our way toward the back, finding and following the paths, borders and lawn, cutting down the brambles as we went piling the waste up either on the patio or in an area at the very back.

After around 4 sessions (usually of a couple of hours) which also included some trips to the tip and more tidying up at the front we had, by the end of November 2018, something looking a bit more like a garden again.

So this is pretty much where we are now and things slow down for the winter. A huge amount of progress has been made but really the hard work begins now. The brambles have rooted everywhere including in between the yew existing plants, shrubs and down the side of the garden so all of this is going to need digging out and then the work can begin on returning the beds and lawn to their former original glory.

This kind of project is probably the most challenging but also the most rewarding. Looking out over a garden tended over many years with a partner or on their own but that has now become a wilderness they can’t even begin to sort out can often be very depressing.

This is what the scheme is here to help with and they really are the most satisfying jobs I get to do.