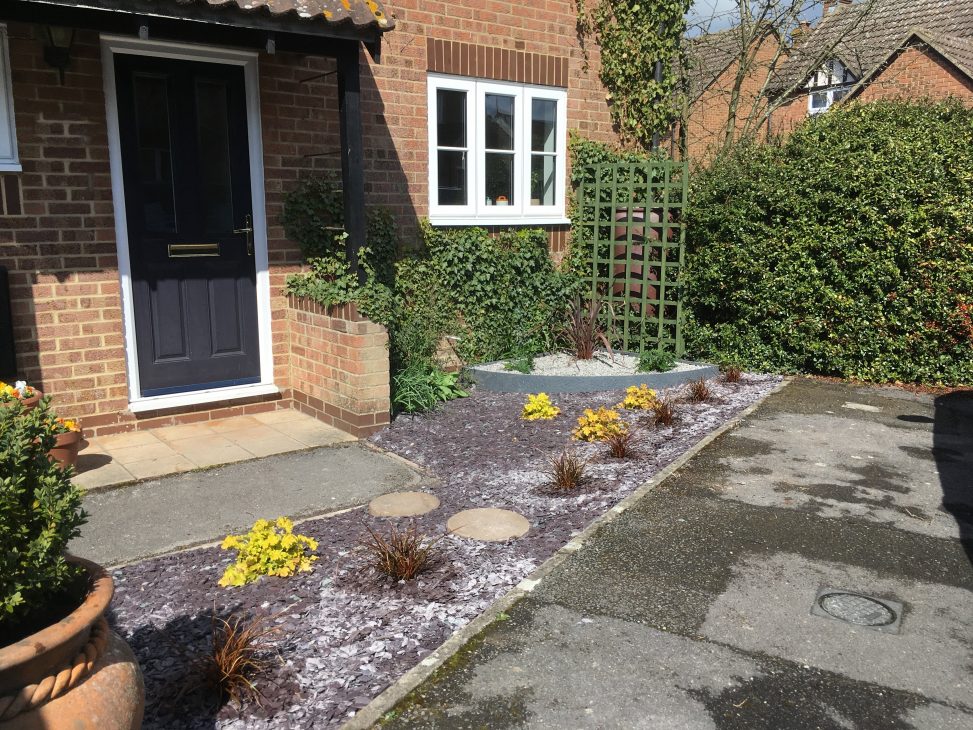 The Front of House Garden

With newer houses all you get is a postage stamp sized area of turf at the front which requires dragging a lawn mower through the house once and a while to keep it looking vaguely respectable.  And so it was  I was asked to see what I could do to turn it around into something that would look good all year around but require very little by way of maintenance – in other words the front of house garden.

This was more of a challenge than it first seems – there is quite a slope and no path from the pavement to the front door – apart from the drive. The (lovely I might add) client had seen some plum slate put down elsewhere and was keen that was used however the planting was going to need to adapt accordingly.

So it was up with the turf and down the with plum slate but there were a few other bits that I thought needed addressing.  Swapping a small postage stamp of turf for that of plum slate is easy but not really adding a great deal to the “Welcome home!” aspect of the house.

I decided a small raised bed (also useful way of dealing with some of the material dug out) would provide a bit of balance and an area to put something a bit more formal, planting wise, in.  Then there was the path to the front door and so a few stepping stones were put in.  We also needed to hide the water butt. Who knew painting trellis is such a pain (but worth it).

Finally the planting – something that compliments and contrasts with the plum slate. So a Phormium (Bronze Baby – New Zealand) which wouldn’t grow too large, some ferns that should fill out nicely, a row of Uncinia rubras and finally a few lime coloured Heucheras to provide a bit of contrast.  Later in the year I am going to plant some Colchicum autumnale ‘Water Lily’ that will pop up here and there and provide a bit of end of year colour, surprise and I hope delight.

This has been in some ways a small project but in other ways an important one. It will take a couple of years to fill out properly but the neighbours have already commented (positively I might add) on the changes and I hope it does what it set out to do… welcome weary people home and not be a chore.