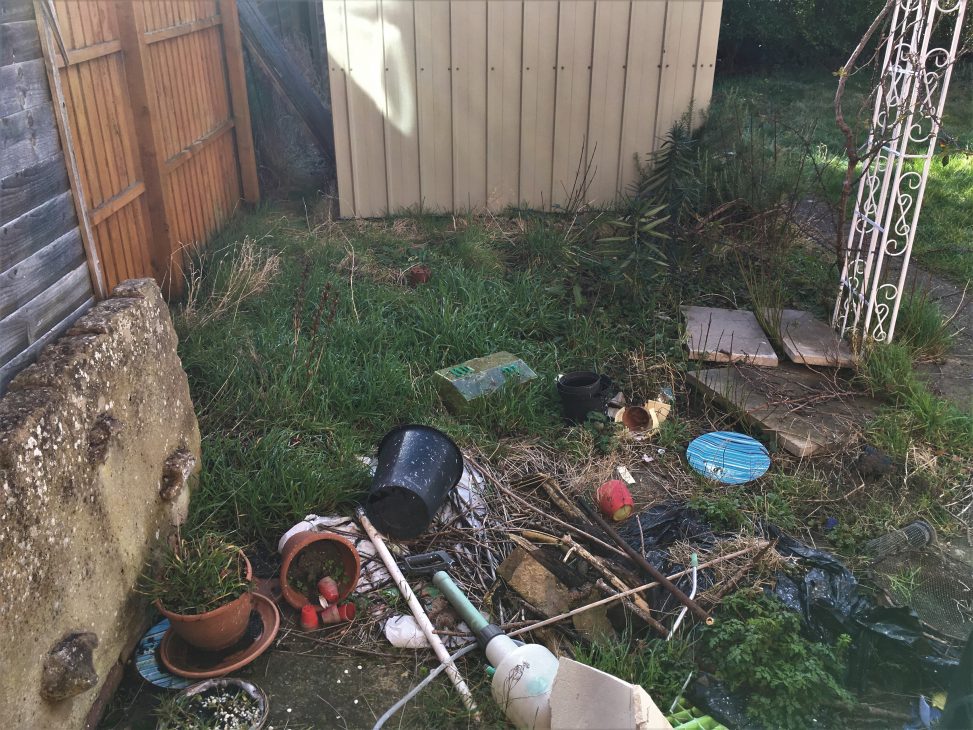 For whatever reason gardens are often (justifiably) the last thing on people’s minds and so it was with this garden – the new owners found themselves with both a house (and garden) that had seen better days.

The house they were well on with sorting but the garden was, understandably, lower down the list of priorities.  However, with a hint of spring around the corner and the promise of summer, they wanted to see if they could get it back in shape again and get growing some vegetables.  In other words… feel the love.

These kind of gardens are in some ways both simple to deal with and very complicated.  You can make substantial inroads very quickly by trimming hedges, mowing the lawn and digging over the beds and feeling a job well done but in reality, it is only the very beginning of a long road.

First on the list was moving the bits of rubbish out of the way so I could move around and then it was time to tackle that back hedge.  Not only had this garden been neglected but so had the garden behind.  As a result the hedge had grown tall but with no foliage at the back – this mean all the foliage (and screening was at the front).

This kind of task is really something that is going to take a few years to sort out.  So the thing to do was to bring the height down a bit so it is uniform and tidier.  In this case it involved removing a number of large branches at the back and then giving the top and front a light trim so it can recover over the rest of the year and we can have another look at it in the autumn.

Next up it was clearing the veg/fruit patch so they were ready for spring.  This task was made much easier by bringing in the garden shredder to chop up the waste along with that from the back hedge.

One wheelie bin full later… and with the rubbish sorted it was time to remove the fabric and see what we had.  Oh dear… a veritable festival of bind weed.  And so it was a good few hours work digging over the bed, carefully removing as much bind weed as possible.

Of course, the bind weed will be back but hopefully the odds have now shifted in our favour.  What that had highlighted is that really the entire garden is full of bind weed which is perhaps why it ended up the state it was in.

Bind weed is such a difficult plant to deal with and whilst you can bring out the weedkiller and think you have won – you haven’t really -the only way you are going to deal with it is by regularly checking and dealing with it as soon as possible.  Leave it to grow, even for short while, and you are making a lot of work for yourself – or in this case me.

So that is where we are with this garden at the moment. I am back shortly to give it a mow and then we should have a bit of a better idea of how things stand and can really start planning.

This garden is still a very long way from being a place of solitude, entertainment, enjoyment and whatever else a garden brings each of us but with a lot of hard work, persistence and patience it won’t be forgotten any more.