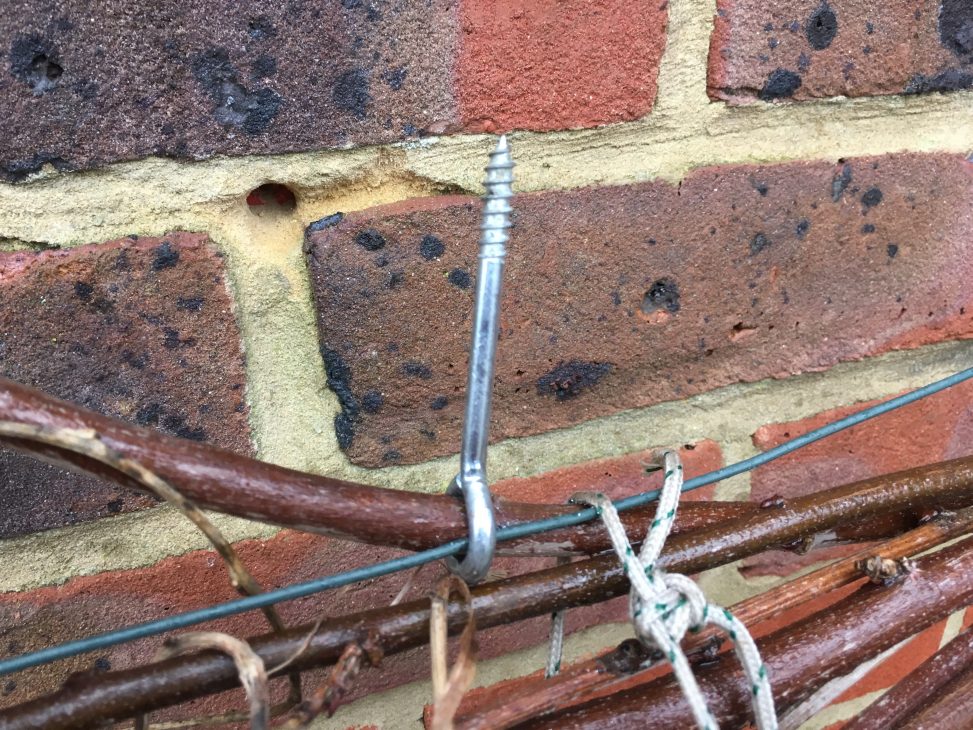 Now is the time to check your wisteria supports

A significant part of a rainy and windy day was recently spent up a ladder giving a wisteria its winter prune.  This is also the best time to check its supports and as you can see a stem had found its way though the eye of a support which was a bit of a challenge to sort out.

This particular wisteria hadn’t been pruned for a few years and in the autumn last year I took out a lot of growth for the owner as it was heading up and over the eves of their house.

So now I was back (January/February), this time to give it a proper tidy up and also deal with issues with the wire supports I spotted previously.

Generally the wire supports were fine but there were three main problems that needed sorting out:

The first issue was a bit of a challenge as I didn’t want to loose that stem or damage it whilst I remove the eye fixing.  The plant was being given thorough tidy and so keeping this key stem was important.

In this case I used a hacksaw to go through about 80% of and across the top of the eye.  Then pair of wire-cutters were used either side of eye cut to force the last 20% to snap.  This worked pretty well and there was very little damage at all to the stem which I was pleased with.

A new eye was fixed to the wall and then a thick wire used to loosely tie in the bunch of stems to it.

The second issue just needed a new eye fitting.  The old hole was too big and loose so a new hole was drilled, an eye fitted and again thick wire was used to tie the bunch of stems in.  The old eye was removed from the wire using a small pair of bolt cutters as I didn’t have to worry about damaging a stem.

For the last problem I removed the thin wire and replaced it with a tree buckle tie to give it a nice wide surface for supporting the bunch of stems.

So the supports should now be fine for the coming year but I will check on them over the course of the year just to make sure everything is fine and then be back again next winter to sort out whatever else needs doing – but hopefully not that much now!