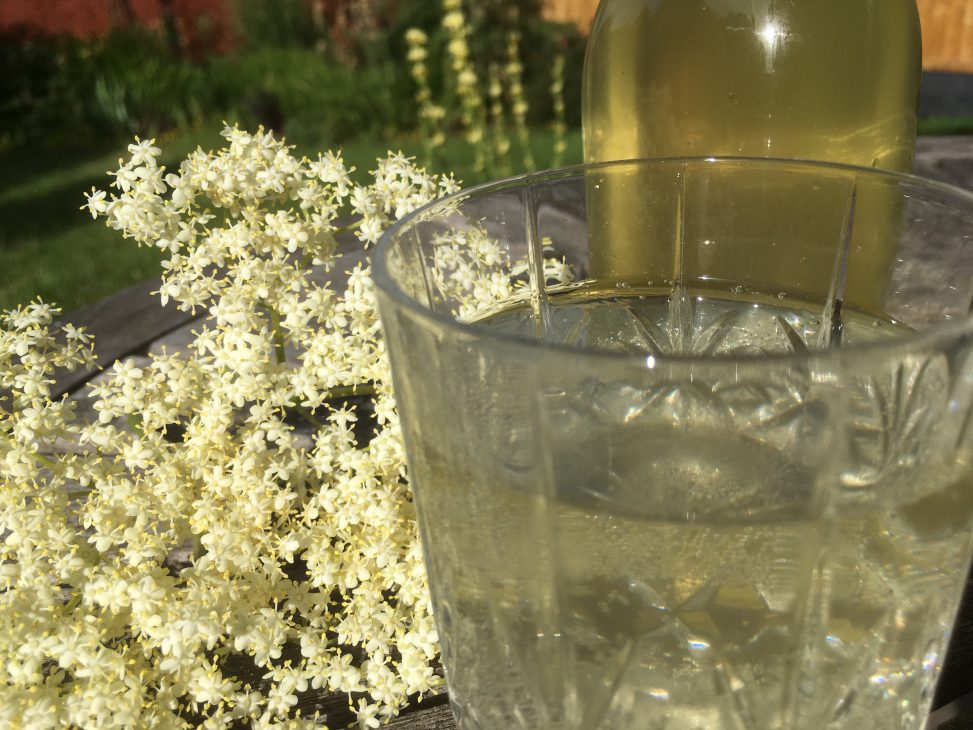 Each June I look at the blooming Elderflowers and think I really should have a go at making some Elderflower cordial and then by the time I have got myself in gear the blooms have faded and the moment is gone. However this time around I was a bit more with it and so with flowers gathered I set about making Elderflower cordial which is a doddle and knocks the spots off the shop bought stuff.

Elderflower cordial has always been for me on a par with Apricots when it comes to any discernible flavour so why bother making the stuff? However having made some redcurrant cordial a while ago which was so much better than the shop bought stuff I thought I really should have a go. All I needed to do was remember to pick the flowers before they quickly fade – and fade quickly they do so you need to make a note in your diary, from mid-May onwards, to check for blooms.

Two years later, I was rather more with it this time around and picked some lovely flower heads. Now I just needed to find a recipe. As ever, I am looking for something quick and simple and clearly written and I settled on this one from BBC Good Food:

Now this recipe (and a few others I came across) require Citric Acid – this prevents the cordial from fermenting and acts as a preservative. In my head of course I was thinking white coat, thick rubber gloves and goggles whilst gingerly moving a large flask of clearly dangerous liquid around the kitchen. Anyway turns out it is stuff you can buy on the high street in a box and it doesn’t require the gloves/goggles/coat (awwww).

The actual advice of the various recipe authors was go to your local Chemist to buy it – really, in this day and age? Turns out that it is not so easy to find however if you have a Wilko close by then you are in luck as they offer it both in a granular and fine powder form. From what I have read they are exactly the same – the granular form is geared or more for its usual purpose of cleaning and the fine powder form for use in brewing however they are the same and the granular form (which is much cheaper) is just fine for use with this recipe. Note I have seen references to “food grade” Citric Acid but again it seems to be exactly the same stuff and I can testify we are all perfectly alive after using Wilko’s Box of cheapo Citric Acid.

So with that sorted digress let’s get back to the recipe… when you first read it, the 2.5kg of sugar with 1.5L of water seems so very wrong and I had to do a double-take. So, to be sure(?) I started to read the comments (never a good idea) and many had thought the same thing and had made various “adjustments” but one of the authors had popped up a comment and said yes the proportions were very much correct so I decided we would go with it as it was.

Apart from halving the quantities and adding a couple more flowerheads, I followed the recipe as is and it really is so easy to do and the end result was a wonderfully tasty surprise especially when added to sparkling water.

The following are a few pictures from the process:

Cordials are pretty easy to make but some are easier than others and this is definitely much easier to do. The BBC Good Food recipe used should be followed as is – adjust based on how much you want to produce of course but keep the the proportions as is – you really won’t be disappointed.

So if you have missed the boat this time around, make a note in your diary for next year, get yourself a box of citric acid from Wilko and when you gather those Elderflower blooms be ready for the best elderflower cordial you have ever tasted (oh and works well in gin and tonic but you just need a very small amount).