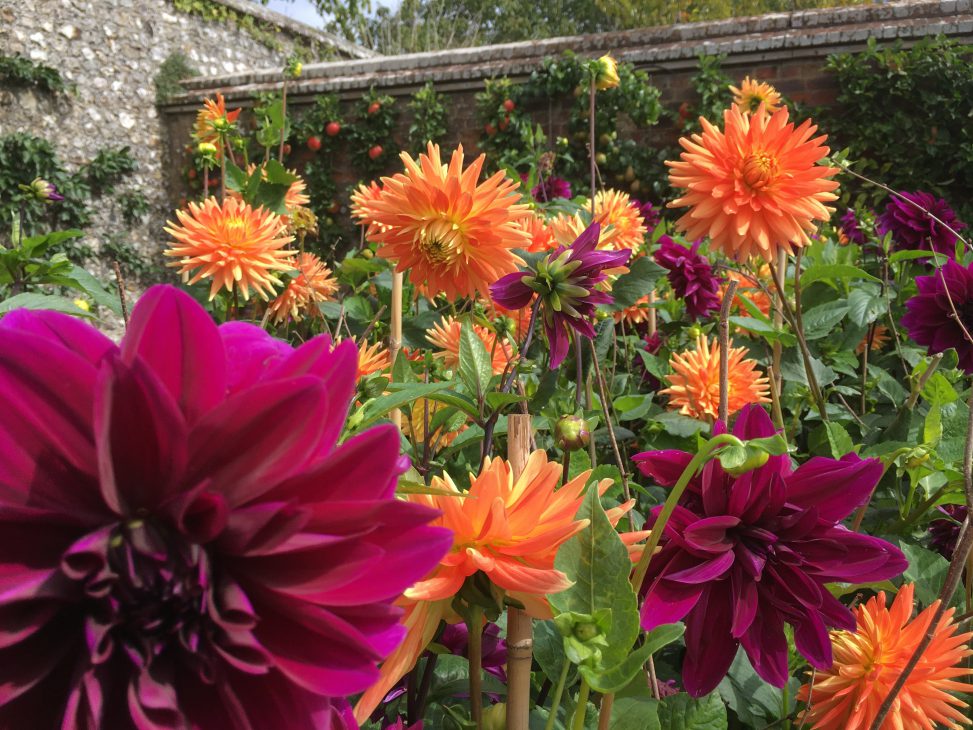 Having been asked twice in quick succession whether or not Dhalias should be lifted I thought a quick post on this topic might be useful as in many cases you really don’t need to lift them but there some good reasons to do so.

So a quick recap on Dhalias. These are a tender perennial with a wonderful array of different flowers and colours but being tender means that at the first sign of frost the top will die off (see picture below!).  This is fine, it is part of their life-cycle and next year they will grow again from their tubers (a cluster carrot-like roots) which are buried in the soil. 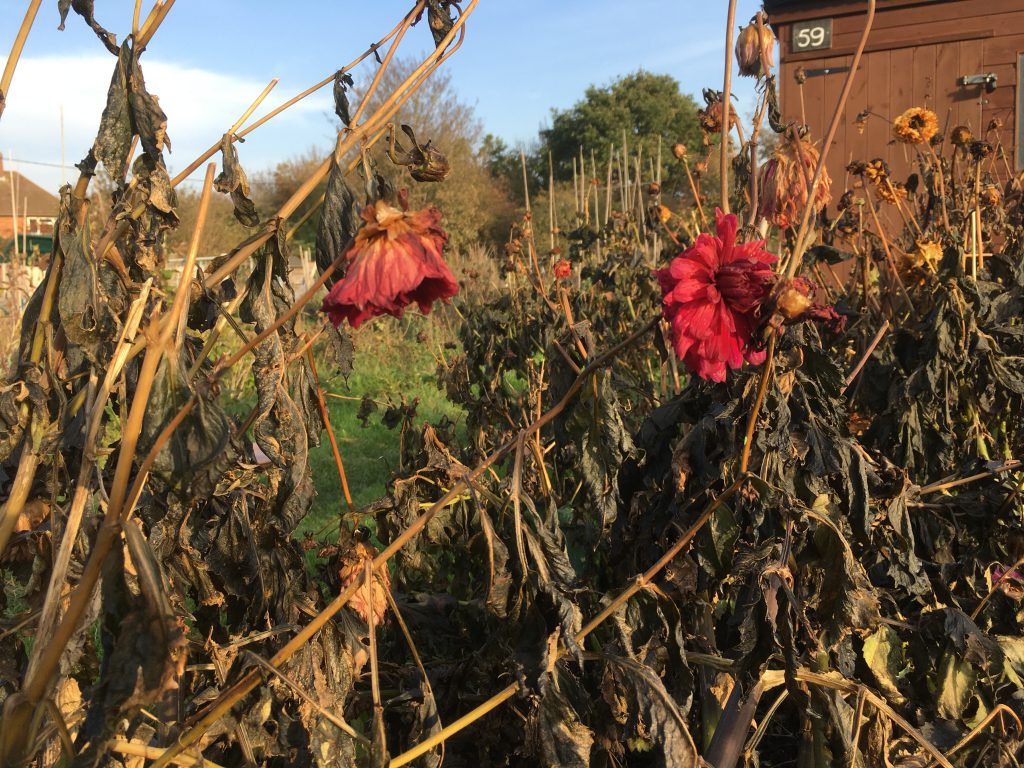 Dhalias tubers will quite happily sit buried in the ground until next year providing the ground doesn’t freeze.  If it does then this will pretty much destroy the tubers and so we won’t have any Dhalias next year – obviously not what we want to happen!

So to stop our Dhalias being killed off completely they can be “lifted” before winter sets in and then replanted again in the spring.  “Lifting” basically means getting them out of the ground and storing them until they are ready to be replanted again.

Now back to the question, should you lift your Dhalias?  Well lifting Dhalias is not difficult or complicated and I have included links to a few articles at the end of this post but the fact that the question keeps being asked means there is some confusion over whether you should or shouldn’t.

We lift Dhalias to stop the tubers from being damaged by the ground freezing which happens if the weather conditions are such over the winter months.

If we want to be absolutely sure our Dhalias won’t be damaged they should always be lifted.

However… our winters are changing, they are milder and wetter with little by way of prolonged cold spells. What this means is it is possible to leave the Dhalias in the ground but to protect against the odd cold spell a layer of protection – a mulch – should be put on the ground above.

The layer of mulch must be a thick (I would say at least 10cm) and dry layer of a material such as straw or bark chippings.  Garden compost or well-rotted manure could also be used but it is likely to be wetter and get wetter over the course of the winter which means it may freeze and so possibly result in the ground underneath freezing as well.  So my view is straw is the best bet but if you want to avoid having clumps of straw dotted around, use the bark chippings.

If however you have a very heavy soil – by which we mean a soil with a lot more clay in then it is probably best to always lift the tubers. Why, well heavy clay soils have a higher proportion of water which means they more likely to freeze if there is a cold snap and that is not what we want for our Dhalia tubers.

So you don’t have to lift your Dhalias providing they are not planted in a heavy clay soil and have a good layer of protection from the cold over the winter months.

Why lifting Dhalias is a good idea

Before I finish, leaving your Dhalias in the ground is, in most cases and with protection, not a problem and it is obviously going to save you some time and hassle however I wanted to just explain that, apart from their protection, there are quite a few benefits to be had by lifting your Dhalias including:

Oh, and what about Dhalias in pots?

This was a follow-up question I was asked and the answer is broadly the same.  Dhalias in pots will not be planted in a heavy soil but the pot, even if it is on feet, may be more exposed to the cold and so freezing.

If the pot can be moved then the simplest solution is to move it inside a garage, shed or at the very least a sheltered spot etc. to over-winter (adding a mulch if still outside).

If the pot cannot be moved because it is too big, then apply the thick mulch and consider also wrapping the pot with something like bubble-wrap and to make it look nicer and add a bit more protection this could then be wrapped with some reed or similar screening cut to size.

Other articles on lifting Dhalias

Below are a few other articles on lifting Dhalias that provide further information and guidance.