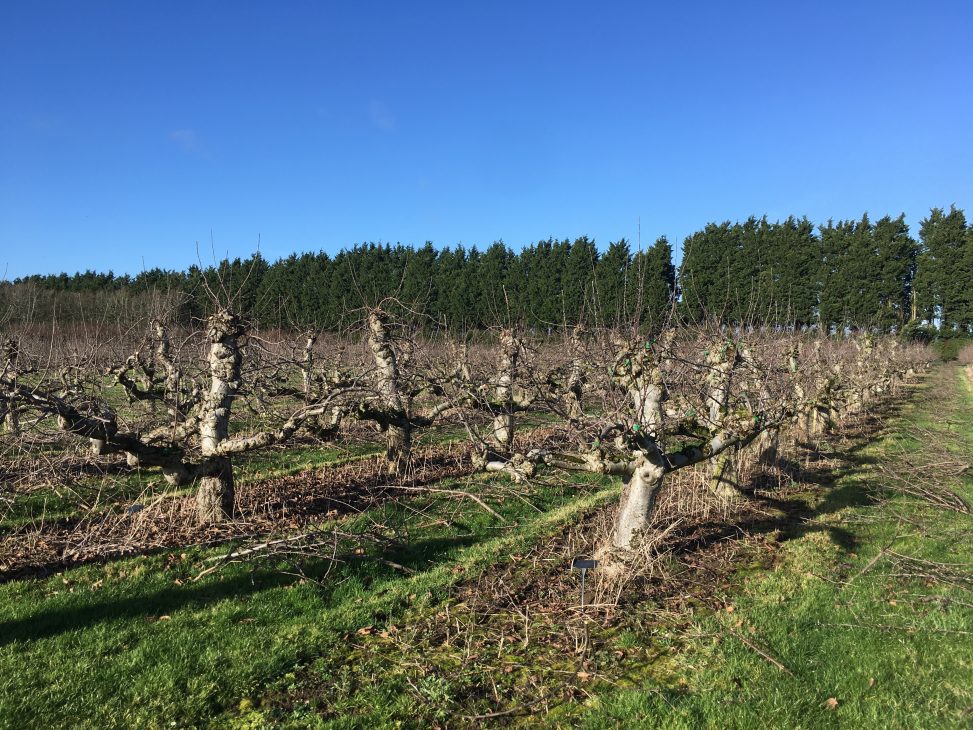 10 Things I Learned from the Fruit Pruning Workshop

After roses, fruit trees are up there with the plants people are most afraid to prune. Left to their own devices, you will soon have an unwieldy mess and yet they just need a bit of care. I needed to get an experts view so booked myself on the Waterperry Pruning Fruit workshop and here I am sharing my top ten tips from the day.

1. The harder you prune an Apple Tree, the more it will grow.
By “harder” this means, cutting back a stem right back to the branch, taking off say 2/3 of some growth or removing a branch entirely rather than just removing a short section of grown from a longer stem. When cut back hard, all the growth effort which was originally going to be distributed along the stem for fruit buds or branch will now be concentrated into the point where you made the cut which is usually not what you want.

2. The best time to prune and Apple Tree is between January and mid-March.
You can prune an Apple Tree in December but the tree may respond with more growth rather than more fruit buds. You can prune up the end of March but absolutely no later and ideally all done by mid-March.

3. You want the fruit bearing branches and stems on an Apple tree to be horizontal.
Not only does this encourage the production of fruit buds, it reduces growth. If a flexible stem is heading upwards see if it can be pulled and hooked underneath a lower stem/branch to get it horizontal. Don’t worry too much about it rubbing just be sure the stem is either removed or pruned next year.  However if you have Cox’s Orange Pippin ignore this – they are susceptible to… everything.

4. Fruit trees are like puppies so train them accordingly
In other words, you must get your training started in its first year otherwise you will be playing catch up. The very first bit of pruning should establish the height of the tree and this should not be more than you can reach over your head otherwise in years to come the ladders will be needed.

5. Never ever prune Plum trees in the winter
Winter is when the spores of Silver Leaf Disease are spread and could ultimately could kill the tree – the spores, and so the disease, enter through wounds such as those from pruning.

7. When the fruit of a plum tree are about the size of a marble, it might be worth removing some of the fruit.
The branches of a plum tree, unlike the Apple and Pear trees are brittle and so sacrificing a bit of fruit is better than losing a branch that snaps under the weight of the fruit.

8. Pear trees can be pruned a bit harder than an Apple Tree as they don’t put on so much growth.
Hard prune an Apple Tree and all you get is a mass of growth where the cut was made – not necessarily what you really want. Pear Trees on the other hand can be pruned harder without incurring all that random growth. So, for example, you can take 2/3 of a stem and you won’t get a whole load of growth next year. Just fruit – yey!

9. Vertical shoots on a Pear Tree are fine as they will fruit well whichever direction the stem is going.
Unlike the stems and branches of Apples (which like a little lie down), Pear tree stems fruit well going up, down, across, any direction really.

10. Finally and most importantly, before you start pruning, think about what you want to achieve.
A 35 year old Apple Tree (at Waterperry) that is about 2m high can produce 150kg of fruit – but only if it has been pruned in the right way. Fruit tree blossom is lovely and difficult to beat, however a mass of rotting fruit littering your lawn is not. If you have a fruit tree, take good care of it, prune it every year and at the right time, don’t let it get above your reach, make sure it has a nice open network of branches and I guarantee it will take good care of you.

The course I attended was run at Waterperry Gardens, in their own orchard, and led by (the seriously experienced) Orchard Manager Chris Lanczak.  If you know the basics of pruning and have an interest in fruit trees, this course is a must.